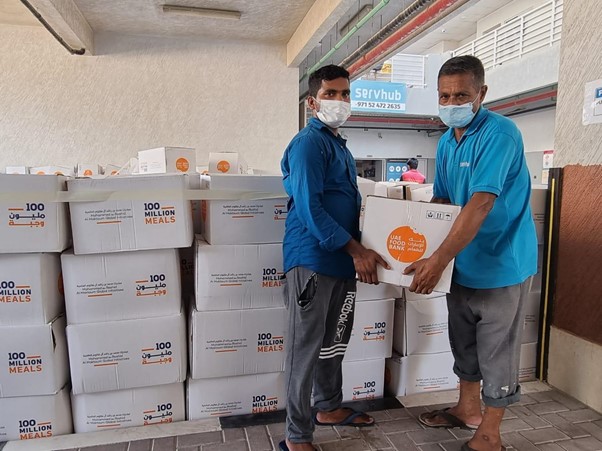 Service- a quality rarely found but commonly needed. It is uncommon that an individual or organisation is able to selflessly serve a community or help other people in need. When found, however, such acts of selflessness and service must be congratulated.

The UAE Food Bank is such a service, launched on January 4th, 2017, under the Mohammed bin Rashid Al Maktoum Global Initiatives (MBRGI). The first Food Bank in the United Arab Emirates- it is a non-profit charitable organisation that perseveres to distribute food to the underprivileged, simultaneously eliminating food waste in hotels, restaurants, and supermarkets. In collaboration with local authorities and local and international charities, by creating an ecosystem- excess food from these places is effectively stored, packaged, and distributed.

In compliance with these values, His Highness Sheikh Mohamed bin Rashid Al Maktoum has said, “Feeding others is the essence of compassion, a pillar of our Emirati values and core to Sheikh Zayed’s legacy”. These principles are seen in the aims of the UAE Food bank, which are to entrench a social responsibility in institutions and individuals alike, to raise awareness of the indispensability of volunteerism in every stage of the process, and to reduce excessive food waste not just in the UAE, but outside as well.

True to their morals, the UAE Food Bank has distributed a total of 27,362 tonnes of food to beneficiaries since the time of establishment in 2017 up until 2020. A total of 144 refrigerators have been placed in different parts of the UAE, 84 of them in Dubai, to collect surplus food distributed across various regions. It has signed 112 agreements, and partnered with establishments in and around the country to ensure the safe distribution of food- in cooperation with UAE based charitable institutions as well as directly to labour accommodations.

One such labour accommodation that was helped immensely by the UAE Food Bank is that of ServHub’s. It has been supplying a minimum of 500 food box every day to all of ServHub’s labour camps. Each food box fulfils the basic nutritional requirements of a balanced diet, containing 10 kilos of rice, 10 kilos of flour, oil, ghee, cereals, and other essentials. In these testing and trying times of the pandemic, when so many families were deprived of basic necessities, the UAE Food Bank rose to the occasion and stepped in as saviours to feed the many people in need, and provided a much-needed ray of hope, ensuring that the lives of thousands of citizens are made easier. To fathom what these individuals and labour organisations, including our own, would have gone through if not for the UAE Food Bank, is truly disturbing. We at ServHub are immensely grateful to them for their compassion and benevolence, and congratulate them on their noble act.