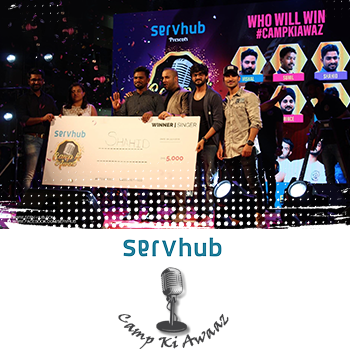 Shahid Iqbal: A superstar from ServHub on the rise

Shahid Iqbal: A superstar from ServHub on the rise

Home » Blogs » Shahid Iqbal: A superstar from ServHub on the rise

ServHub isn’t just providing accommodation, it is honing skills too! We keep on doing something new every day, so as to make the blue-collar workforce comfortable, engaged, and motivated. One such platform was ServHub’sCamp kiAwaaz, where we found a gem, and now he is a rising star already.

He is Shahid Iqbal, a lad from Punjab, Pakistan, working in a Chinese construction company. He did what he aimed, became a singer star, and now is preparing for more. The amazing journey began at ServHub’s Jebel Ali labour accommodation, where Shahid Iqbal stayed for long. Shahid was awarded at ServHub Camp kiAwaaz in 2019 as the best singer, recently he has launched his first album with 500+ followers already. Aiming for more, he wishes to launch his second song at the auspicious occasion of Eid in July 2021.

All began at ServHub Camp

On asking about his beautiful journey, he proudly said, ’ServHub gave me the motivation & recognition. Six years back I figured out my talent to sing, however, I am not a trained singer, this voice is gifted by the Lord, and I am grateful.’ He digs out memories from 2019 when he was staying at ServHub labour accommodation, ‘I was fond of singing and my mates knew this. One day they told me about an event being organized by ServHub, and asked me to join. I enquired and got to know about the singing competition. Enthusiastically I went and tried my bit, the judges appreciated my voice and after a few days received a call from ServHub about my selection. My training was then started by professionals. We were a total of 5 people who took the training and learned the way.

I eventually won the show ‘ServHubCampkiAwaaz, ’ and received an amount of AED 5000. It was the best day ever. My confidence was on rocket-sky mode. Never ever had I participated on any such platform, and here was I…the winner!

Since then I never saw back, kept heading, participated at various shows and won.

2019 was a turning point for Shahid Iqbal. ServHub identified the hidden gem and lifted him up above. He has recently launched an album which is followed by more than 500 people. Shahid is planning for a second album very soon, probably at Eid in July. He is mesmerized by how people are appreciating his talent. Even his company has been very supportive and has encouraged him for the better. His wife & two kids in Pakistan are proud of him, relatives call and congratulate him, people around are glad to have him, and he is a proud man! Can’t ask God for more, He adds.

Shahid gives credit to ServHub for acknowledging his worth, and also loves the idea of events like ‘ServHubCamp kiAwaaz.’ Even ServHub believes that such competitions give away to those who haven’t yet got a chance to showcase their talent. We are proudly giving them a platform to touch the sky and realize their worth!